The Hottest Hairstyles and Red Carpet Looks at the 2016 Grammys

Taylor Swift turned everyone’s head with her super short, blunt cut with bangs at this year’s Grammys. She paired the eye-catching cut with a bright orange crop top that bared her enviable abs and fuchsia skirt with a very high slit (one that would make Angeline Jolie blush). Her ‘do at this year’s award show was sleek and styled straight, a huge change from her original long, curly locks shown on the cover of her first album, aptly named Taylor Swift.

Beyonce looked angelic with her bronde hair slicked back in a low bun with a deep side part. She paired her highly refined hairstyle with a one-of-a-kind Victorian-inspired gown, which was, in fact, a wedding dress from Inbal Dror’s 2016 collection! A far different look than the tousled waves we’ve come to expect her to wear at award show, Beyonce’s sleek and understated hairstyle was unexpected perfection for the Grammy red carpet. 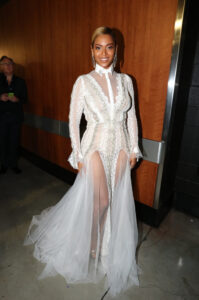 Janelle Monae’s thick, long pigtail braids simply took her flawless avante guard look to the next level of fabulousness, pairing a white shirt and circular black skirt creation by Jean Paul Gaultier. Her look was “topped off” by a black and white striped hat, keeping with her black-and-white theme and gorgeous black fringed heels. Bold pigtail braids have been sported by a number of celebrities recently but Janelle’s thick braids is our favorite variation of this look. 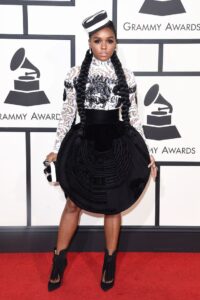 The Salon at 10 Newbury